Are you planning a road trip and driving in France? Or are you going on holiday to France to visit the country? If yes, this article might help you a lot to understand how to drive in France and what to expect from them. It can be difficult to drive in France since French people tend to drive fast and the government is really working on getting fewer people getting killed on the road. For your information, they were 8160 people killed in 2001 on the French roads. In 2018, France manages to reduce the number to 3259 deads.

The laws about driving in France are getting stricter by the time and it is working. You might understand why there are radars everywhere when you will see some of the French people driving. By the way, if you want to learn more about this subject go read my article about French cars: The main French car brands.

1 – What are the speed limits in France?

One of my advice would be for you to respect the speed limitations. First, this is for your safety. Second, there are a lot of radars on the roads mentioned by a sign, and, the police sometimes hide to catch the cars that are not respecting the law. The government of Macron voted for a new law to reduce the speed on certain roads.

The main rules about speed limitation in France:

There are speed reductions for “wet roads”. This only applies if it’s actually raining. For example, the speed on the highway will be reduced from 130 km/h to 110 km/h.

Tips about driving in France:
You can use the Waze app or the ViaMichelin app for the variable speed limits, if you put in directions for where you’re driving, it updates as you’re driving.

2 – Road signs that you should consider in France

Red circle sign: It is forbidden or it is an order 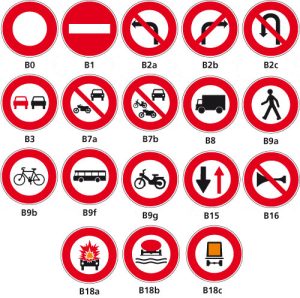 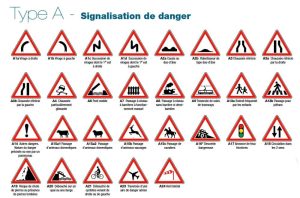 Priority from the right: Meaning that unless there’s a give-way line at a junction, the driver on your right has the right of way. 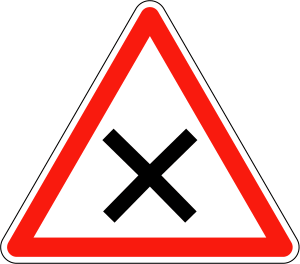 Priority from the right France

Stop sign: This information is for our American readers, I have been in the USA 🙂 When you see a STOP sign at a junction, you have to physically stop. You can receive a fine of €135, and, if you are French you will lose four points on your driving license. There are 12 points on the French driving license.

Radar sign: a sign, few meters before, will announce the radars, watch out for them. France is developing radars that check your speed in between two points and calculate your average speed. 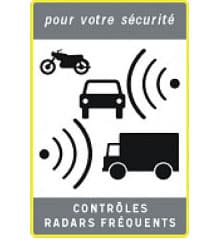 3 – How do you take the highway in France?

A blue sign will indicate French highways. Most of the highways in France are not free. You will have to go through a toll. Facing the tolls, you will have different options. You will need a highway pass to get through the “Télépéage” with the orange “T” and you might not have one in your car. Go to the toll with the green arrow, the credit card, or cash signs. 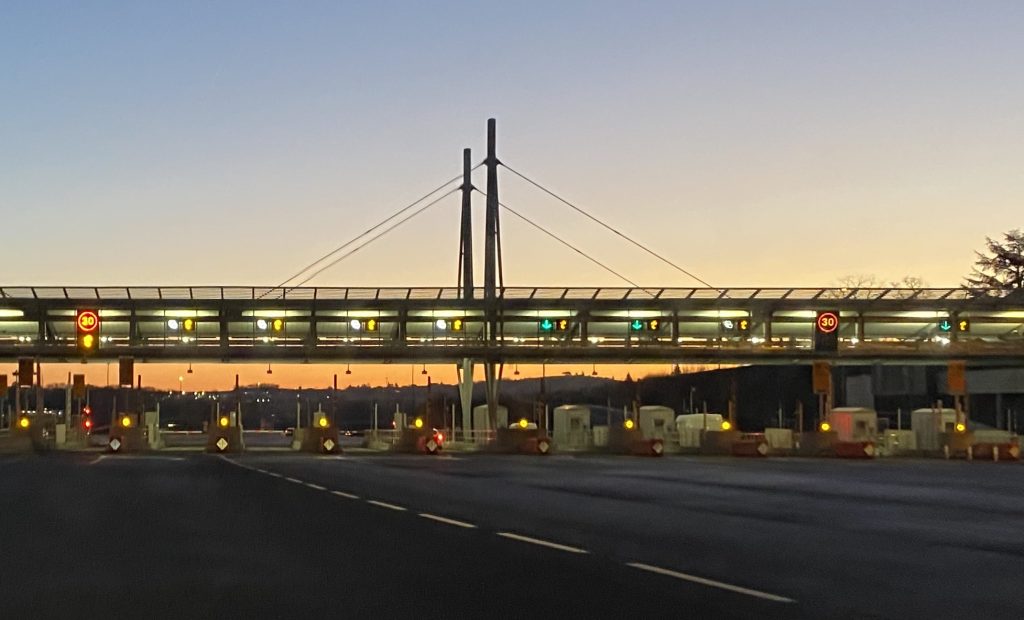 Are you driving through France with a rental car? If yes, you should know that rental car companies would not overcharge you if you drop your car in another city. If the company charges you, it would not be pricey. Planning to drive an automatic car? I recommend you book it in advance.

5 – How is the French people’s way of driving?

Don’t be intimidated into speeding because someone is driving too close to you, if it bothers you, pull in and let them race on ahead and get fined themselves. French people love overtaking and then nipping in front of you really close but it is a nationwide thing and they do not mean anything by it. Drive defensively, expects the oncoming car to be coming round the corner on your side of the road, French people often cut corners.

Also, they tend not to use indicators and sometimes they are using them in the middle of the road at a speed exceeding the legal limit to show that they are in the hurry.

You need to have a yellow gilet and breakdown triangle in the car. A weird law to me is that you cannot drive barefoot, in sandals, open toes/heels, or flip flops but you must wear full shoes at all times.

The no-license car exists in France, and the maximum speed is 45 km/h. They are so slow and so small that they can be dangerous on the road. That car can be driven at the age of 14! Can you imagine! Also, a French teenager can ride a moppet at 14 years old.

8 – Driver gestures that you will see while driving in France

Circle roads are quite popular in France. This is a national competition among French cities. The city halls love to decorate circle roads with statues or art objects using bad taste, most of the time. By the way, this is one of the fun facts about France, I wrote about it: 10 Fun Facts About France That are Mindblowing.

Your GPS does not work anymore? No panics follow the sign “Toutes directions”, “Every direction”. This sign will take you to the big junctions where you can find your way.

I hope that this guide will help you with your next trip to France and do not get offended if a French driver overtakes you 🙂 Now, I invite you to read my article about How to call French phone numbers.

Bonjour! I am Sacha, a French person. I have been living in different countries (USA, Spain, Australia, Mexico, Czech Republic, and Austria). I lived with many nationalities and I loved sharing my recommendations about the last must-see, must listen things about France. I decided to begin in 2019, to launch French Iceberg.

This blog was created to promote French culture from a different point of view. This website is about travels, movies, TV shows, slang, recipes, and songs that are trendy in France.

Why the name French Iceberg? Culture is like an iceberg and most of it is submerged.