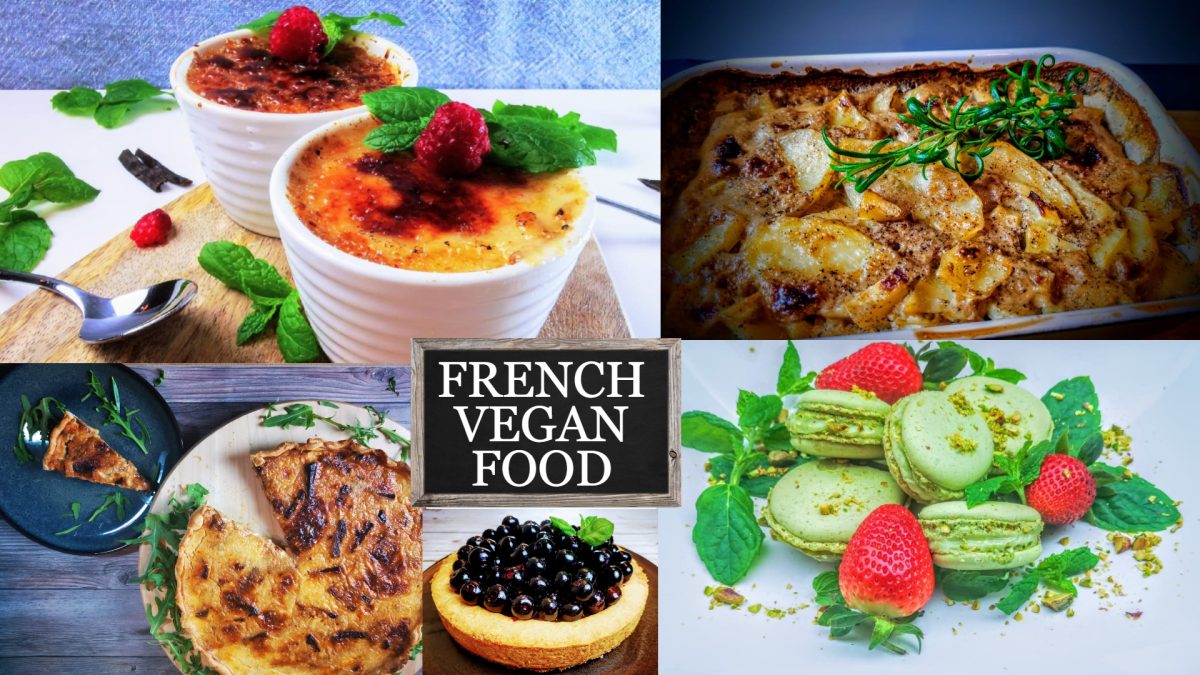 France is the most visited country in the world (according to World Tourism Association) and that by far ! The reason for that isn’t our general level in English, but more so the breathtaking landscapes, the culture and the renowned French cuisine. Today French cuisine is still considered a reference in the world because of its cultural aspect. It has innovated greatly over the many centuries, changing along with social and political changes in France. Now, there is a new emerging trend the French vegan food. Let’s discover it with the French YouTuber Renée Scharningg and her cooking YouTube channel VegeOdyssey 👀

Today it seems that the French cuisine is at a crossroads yet again. A busy life does not always leave time for a three-course meal. In addition, both the current sanitary crisis and the ethical question about the impact of meat and dairy on climate change, and the cruelty that takes place in the meat and dairy industry leads us to change our dietary habits as a society. In the middle of this crossroads, new ideas like French vegan food and ways of cooking competes with aggressive lobbies and industrial interest vested in the status quo. It is in this context that new dietary habits are shaped, and the current trend is less meat and dairy  (Anna Schaverien, the local).

This changing of the food culture of the previous generation to adapt to current values sparks the question of what is essential to the French cuisine for it to keep its distinguishing ‘’factor’’ while aligning our cooking with our values. Going forward, we will investigate what brings the ‘’French’’ touch in cooking and how we can incorporate these French cooking hacks in our daily cooking. You can also read this previous article 3 Easy French dishes to cook to be like a French Chef.

In the last decade, it seems that French cuisine has lost some of its attractiveness. Some would argue that it is due to the snobbism of the once prestigious great restaurant chefs that rely heavily on meats, while others would say that the lack of adaptation to a form that is more accessible to the public causes this decline. Indeed over the last decade, our dietary habits and schedules have evolved, as staying hours in the kitchen doesn’t seem that enviable anymore with longer working hours, commute times, or the importance of the dinner meal as a family ritual (Anna Schaverien, the local). In the meanwhile, delicious vegetarian and easy recipes from countries and regions in Asia have gained popularity. But this very spicy cuisine is not suitable for all taste buds. Indeed, French food doesn’t have very strong spices, thus can be most suited to those who are not used nor interested in spicy food. Indeed,  French cuisine is flavored by incorporating herbs and vegetables iconic of the Mediterranean and Provencal cuisine. This applies to all dishes, especially the meat dishes where the iconic Bouquet garni (mix of herbs tight together) is used to flavor the meat as for example a Bœuf Bourguignon and a Blanquette de Veau.

This use and combination of herbs not only flavor our dish but are also important in improving health.

Indeed, while different herbs used in French cuisine each have different benefits, relieve inflammation, improving the immune system, and help in the fight against cancer are just a few of those found in for example Oregano, Thyme, Rosemary, etc. (Tapsell, 2006).

By the way, if you use herbs in your cooking you need less salt and it will still feel like there is more salt because herbs bring out the flavors in the dish in a similar way as salt, but you don’t have the negatives effect of too much salt.

The extraction of flavor and vital minerals to flavor a dish can be done in two ways. The first and the most obvious is by putting them with the marinade or with the preparation, such as done here.

The other way to use vegetables and herbs is through the use of vegetable broth. This is also an anti-waist recipe if you have too many vegetables lying around and going on holiday, as this broth can be frozen in. The way it works –simplified – is that through cooking those vegetables together with water, the flavor and vital minerals get extracted into the water. You then separate the water from the vegetables, and you have your broth. This broth can be kept in the fridge for up to a week or in the freezer for up to 2 months. It can use in many preparations such as stews, soups but also replace oil when sautéing your vegetables if you wish to cut on oil. Here is how you make vegetable stock.

Regarding the taste, it all depends on the cooking method you’re using, regardless of whether you’re marinating meat – or tofu!

With the decline all over the world, and in France as well as the consumption of meat and dairy products (Anna Schaverien, for The Local in the article hereunder), it seems that the golden age of French cuisine is over. French vegan food might be a new trend. However, the texture of the meat can easily be recreated in a protein-rich vegan form (link hereunder), and to them can be applied French cooking methods (like flambeing, cooking with spirits, or marinating) as well as a flavoring with vegetables and herbs. Indeed, veganizing the French cuisine could be a solution to save it, but also incorporate healthier proteins, herbs, and vegetables into our eating habits.

A few of the techniques and essentials are found in the series of kitchen basics but also in other cooking videos on the channel.

French cuisine is renowned, prestigious and a benchmark for good eating and authentic dishes all over the world. It has influenced (and been influenced by) many cuisines and it is as diverse as it is authentic, varying in products from north to south and from east to west. Some claim that a central element to French cuisine is the use of dairy and meat. However, there is a catch.

Many styles of cuisine use dairy and meat in their cooking, not as French vegan cuisine, but it hasn’t made their cuisine as famous as the French one. As for me I, often get asked if I didn’t miss real French cuisine, when in fact the real authenticity of French cuisine relies on the interesting combination of ingredients, the techniques which create the flavor, and not the least: the creativity. Whether it is a simple dish or one that takes you several hours, whether it is with more affordable ingredients, or high-end spirits and ingredients.

The French cuisine as it was created over the last hundreds of years is the product of continuous enhancements over the years, and the next chapter is to be written integrating veganism. French cuisine is part of our French culture and any culture can die when it is closed to adapting itself. The biggest challenge French cuisine is facing right now is double, it’s our inability to enhance and the pretentiousness that comes with it which translates into real life in people claiming it’s not the « real deal » if not with meat and dairy. However, traditionally, a lot of transformations have been made in French cooking.

Some of the innovations in French cuisine in the far past seem self-evident now. For example, an iconic dish as Coqs au vin started with the use of the rooster but now typically uses a chicken. That was probably a change for the better, some argue, while we could argue that in the light of what we know today this change has to be made now towards a vegan and delicious version of these traditional dishes. By the creativity that made French cuisine famous in the first place. The possibilities are endless and so are the possibilities to be creative with this dish, whether it is Coqs au vin, or with French cuisine in general.

While to a certain degree, there is dogmatism that leads to a certain loss of attractiveness in French cuisine, our French cuisine is not set in stone and what is essential to its flavoring by herbs and vegetables, cooking techniques, and its creativity. As for its future in a world that consumes less meat and dairy, well, the future of French cuisine is what we French will make of it!

For the eggs in baking, the replacement is magical, its Aquafaba. It’s the liquid found in soaked chickpeas; 3 to four big spoons correspond to one egg.

For milk and cream, good vegan milk (soy milk, almond milk, etc.) and cream exist and you can play with the flavors. Almond milk can give a more honey-like taste in the preparation whereas cashew milk and soy milk come the closest to the taste of cow milk.

Buy ready meat replacers or make them yourself. While there has been a lot of improvement these last years of « meat replacements » found in supermarkets. These are actually textured vegetable proteins that you get by a mix of herbs and spices, plant-based protein such as beans, lentils, tofu  and some flour(very little) which contains gluten (or not) to make it stick together. Many recipes for making your own meat or fish replacement are on the channel.

Feel free to subscribe to my YouTube channel if you want to learn more about French cuisine. I hope you enjoy learning about French vegan food, see you soon! 😊👩‍🍳

Sources (of the statistics):

What is the Cronut, the French pastry from the USA?

The best French Alps foods from Fondue to Raclette

5 French startups that are revolutionizing the alimentary industry

Learn about how to call French phone numbers

50 French slang words that your teacher hides from you

5 French startups that are revolutionizing the alimentary industry